Why It's Fun: World of Goo

The age of digitally-distributed media is upon us (I mean just look at this life-changing announcement!) and in the world of videogames this has most definitely been a good thing.
"Why?" you ask, sweat beading on your forehead in clamorous anticipation...
Because, sirs and madams, it has given startup indie game developers the means to distribute (and thus, the motive to create) games with fresh ideas that stand as beacons of hope in a monotonous minefield of first-person-shooters that have you trudging through monotonous minefields.
Case in point: World of Goo 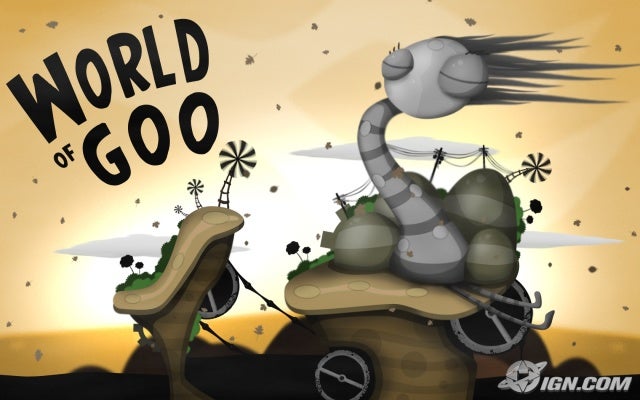 World of Goo is a very strange game that has you building squishy, truss-like structures out of eager and eccentric goo-balls to reach up and up and up...
The game is fun because it taps into that child-like sense of discovery you first satiated in a sandbox during recess, learning through trial-and-error that the world has rules and that you can exploit them to create freakin' castles (and in my case, tunnels and moats to accompany said castles).
In other words, the game is fun because physics are phun (as is, surprisingly, Engineering), and the game's foundation is a cartoony approximation of physics on a 2d-plane that would make Newton proud and quite possibly queasy. The game understands that a sense of true interaction is a videogame's greatest asset; your in-game cursor leaves an ink-blot trail as you whip it around, frantically grabbing goo-balls who stop and stare at you with a satisfying "pop" as you mouse over them and who scream in zany mixtures of terror and glee when you throw them or, more constructively, incorporate them into a structure you're building. The constant feedback gives the player a sense that they're really an integrated part of this quirky, sarcasm-laced world with direct influence on its viscous inhabitants. Couple this with consistently inventive and imaginative level design that requires an ever-increasing intuitive understanding of the physics (each new level builds on the skills learned in the previous ones without ever repeating quite the same scenario) and a sometimes esoteric but always amusingly satirical sense of humor (with plenty of jabs at corporate America) and you've got a game that blows most big-budget productions out of the water (did I mention it was made by two guys whose office is whatever coffee shop they decide to go to on a given day?).
If the gameplay sounds very vague and confusing, it's because trying to describe in words such an original concept is akin to listing off a series of notes to convince someone that a melody is compelling. You really need to play a bit of the game to get a feel for it, and you can!
You can purchase the game from a host of places (including WiiWare and soon, the iPad) but if you buy direct from the dev's site this week only, they're donating 100% of the sales to some good charities.
Arbitrary Rating: 348 goo-balls
Posted by Tony Puccinelli at 12:00 AM No comments:

A new era for Pearls on a String

Following in the footsteps of some friends, I have decided to sporadically (which means there may be only one entry) review videogames on this blog that has been serving no purpose for the past few months in a series I will call "Why it's Fun".

These entries will, apart from the rest of this sentence, not be concerned with the ongoing "can videogames be art?" debate, which has wasted everybody's time in the wake of some old guy's rants that, while quite intelligent, aren't at all fair in an apples vs. oranges type of way (a tip: you can't judge an inherently interactive medium by watching YouTube videos about it; you aren't experiencing it as intended!); Rather, I'll treat these games as meticulously constructed experiences and leave what to call those experiences to you, dear lone reader of this blog!

ABOUT VIDEOGAMES!!!
Posted by Tony Puccinelli at 10:19 PM No comments: